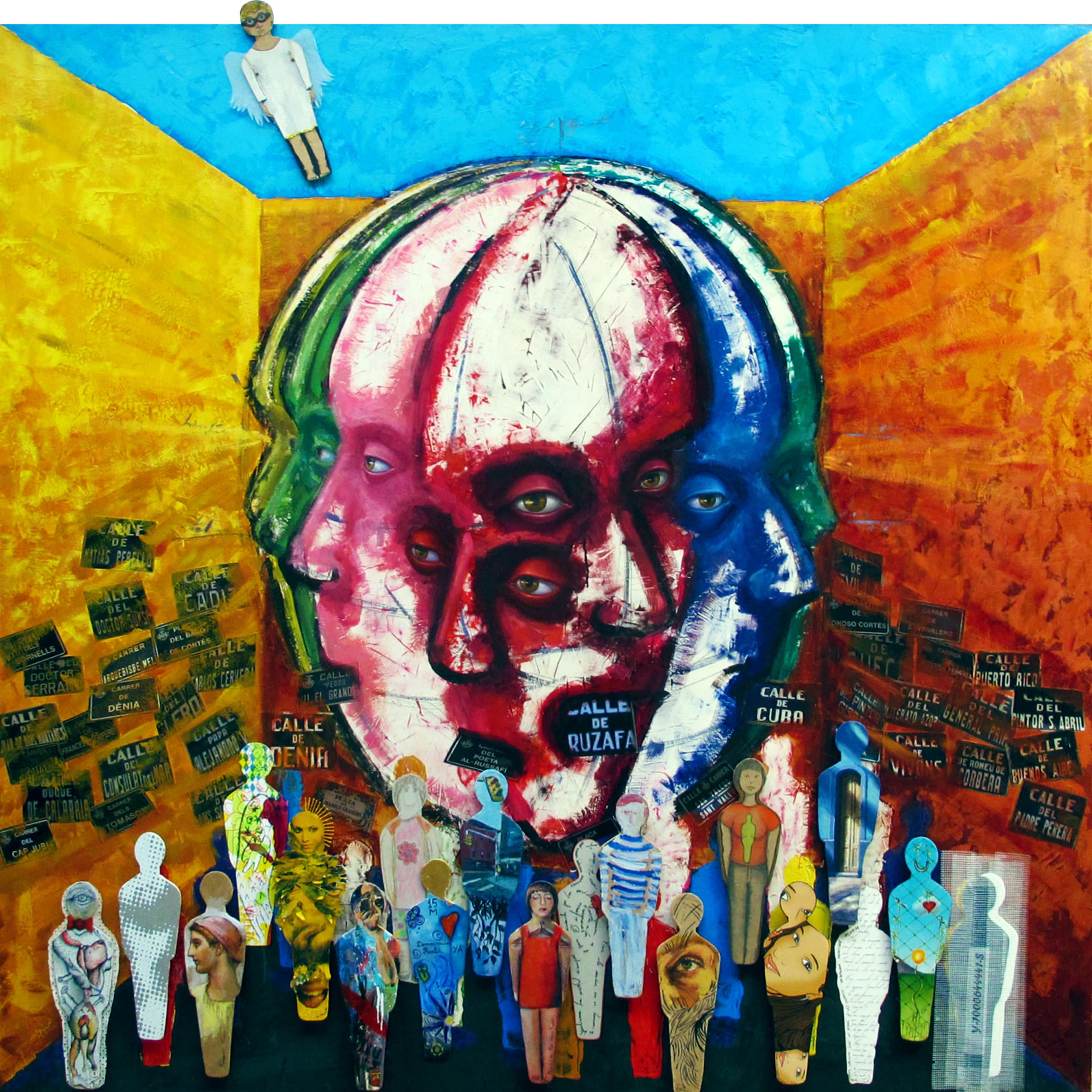 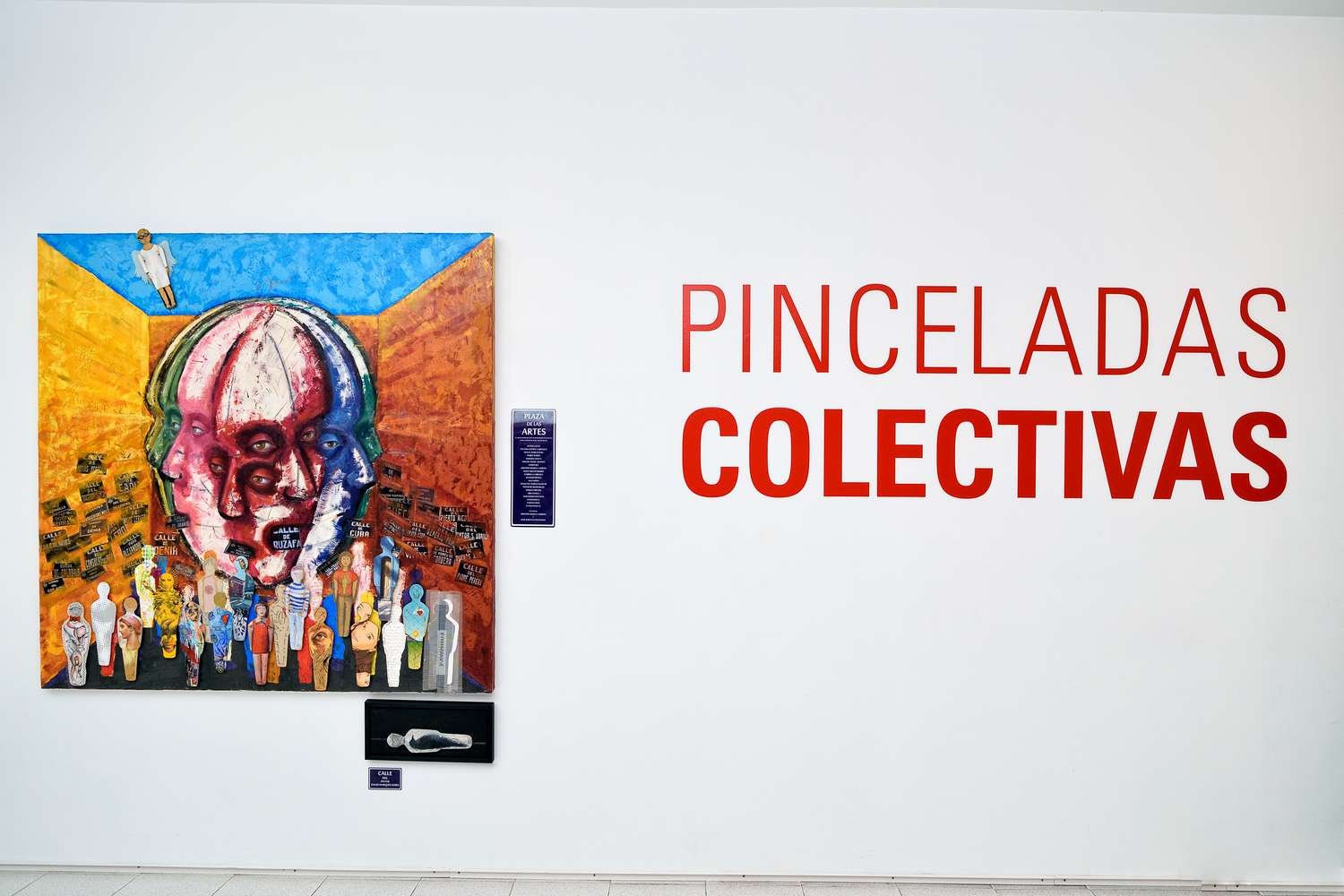 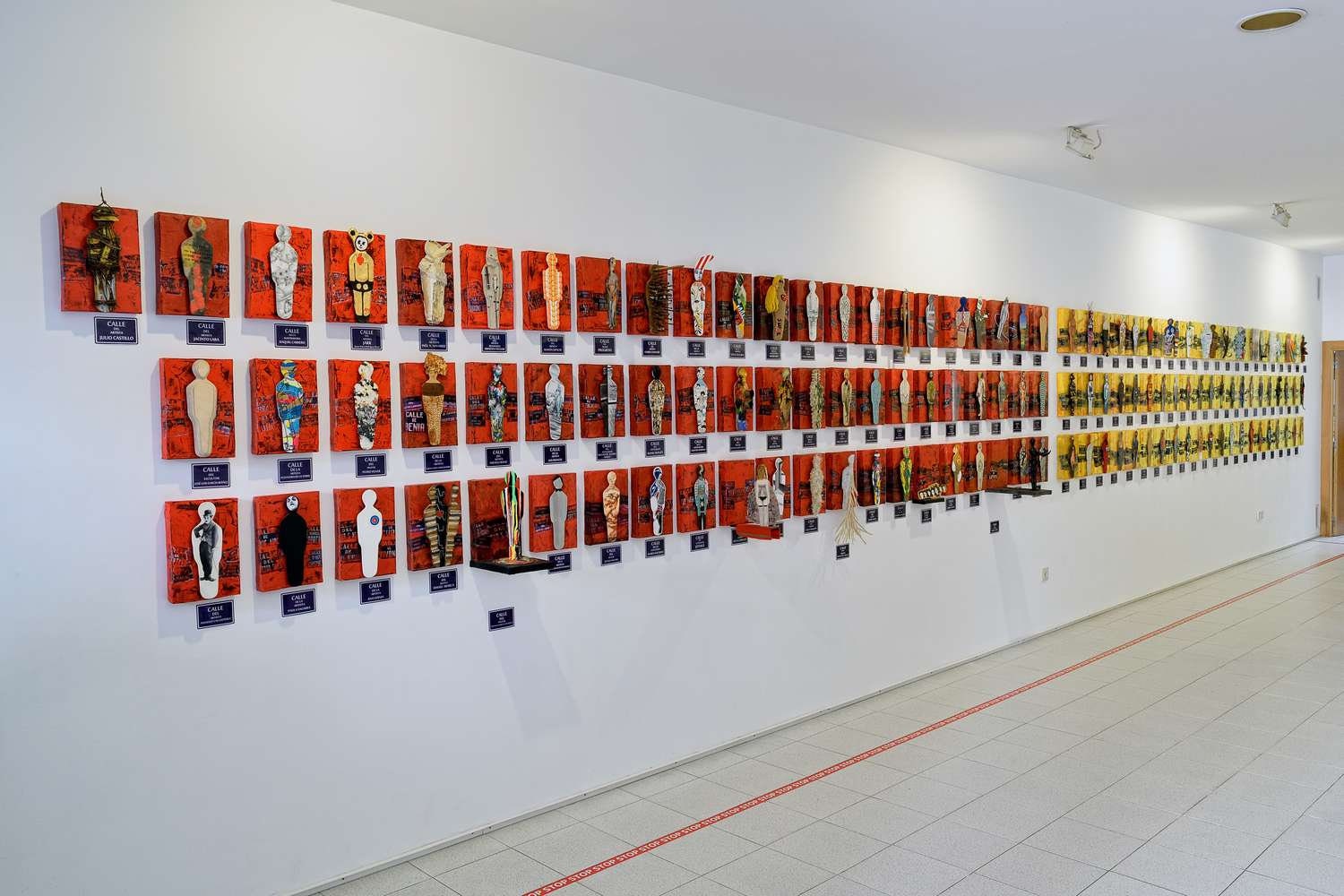 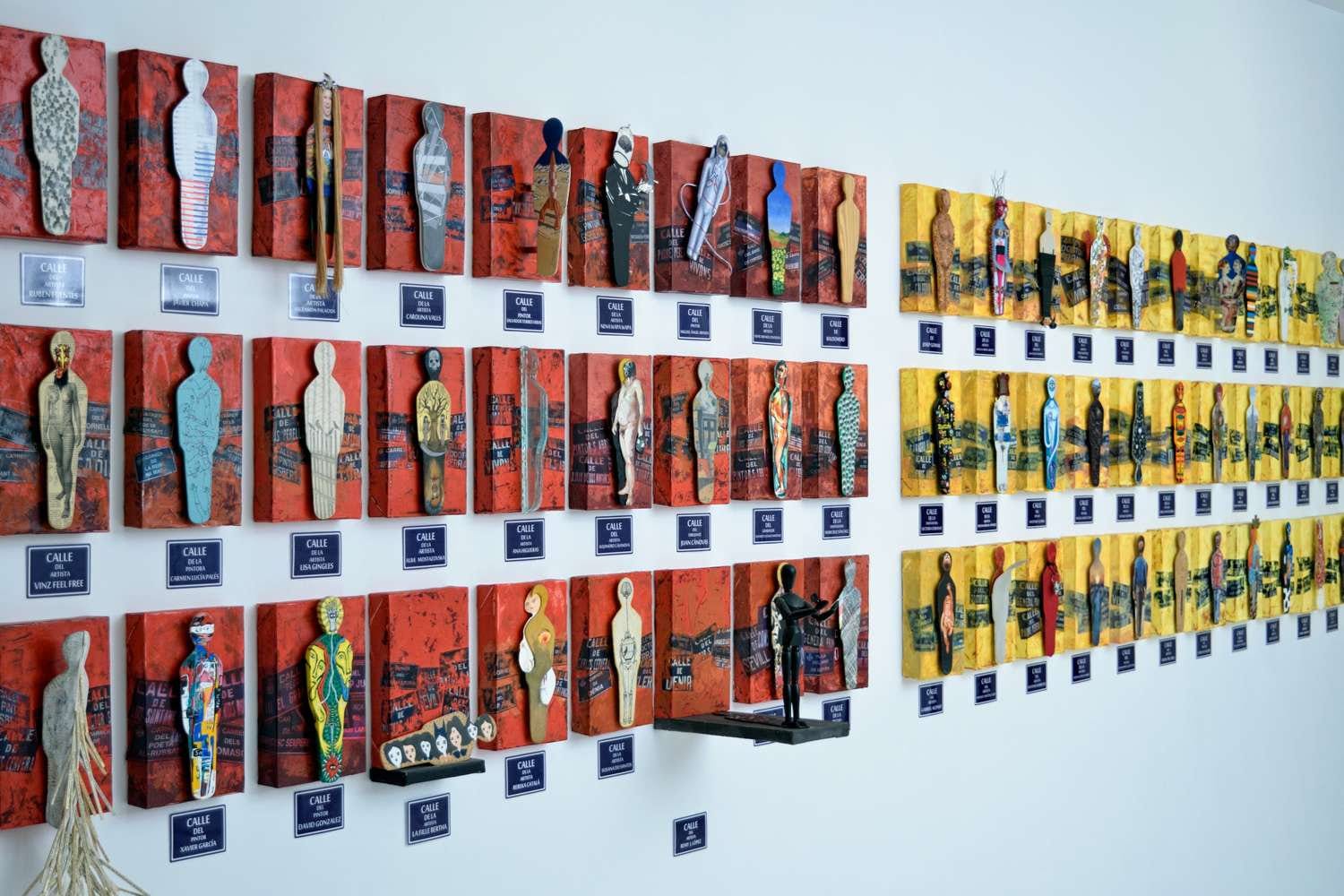 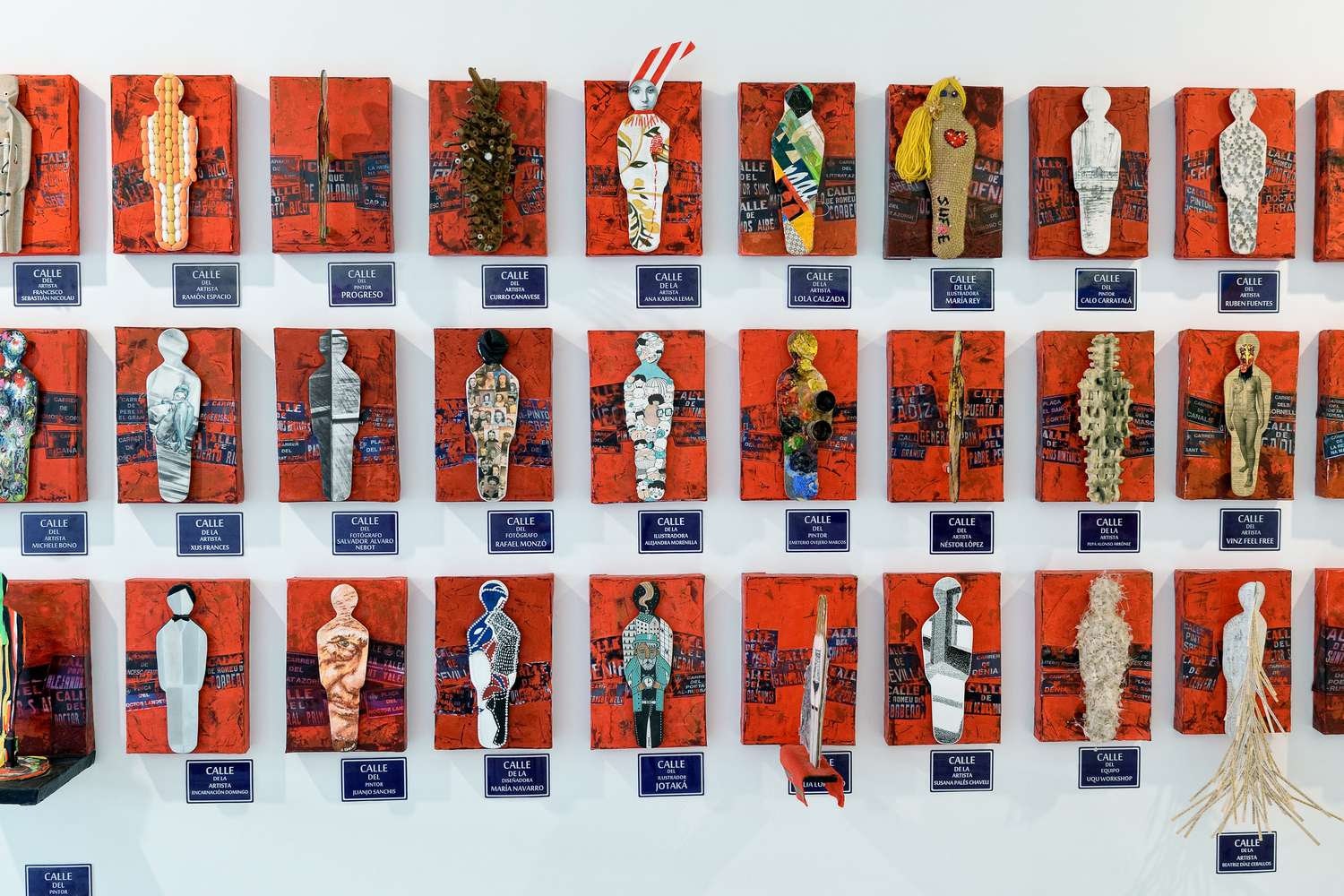 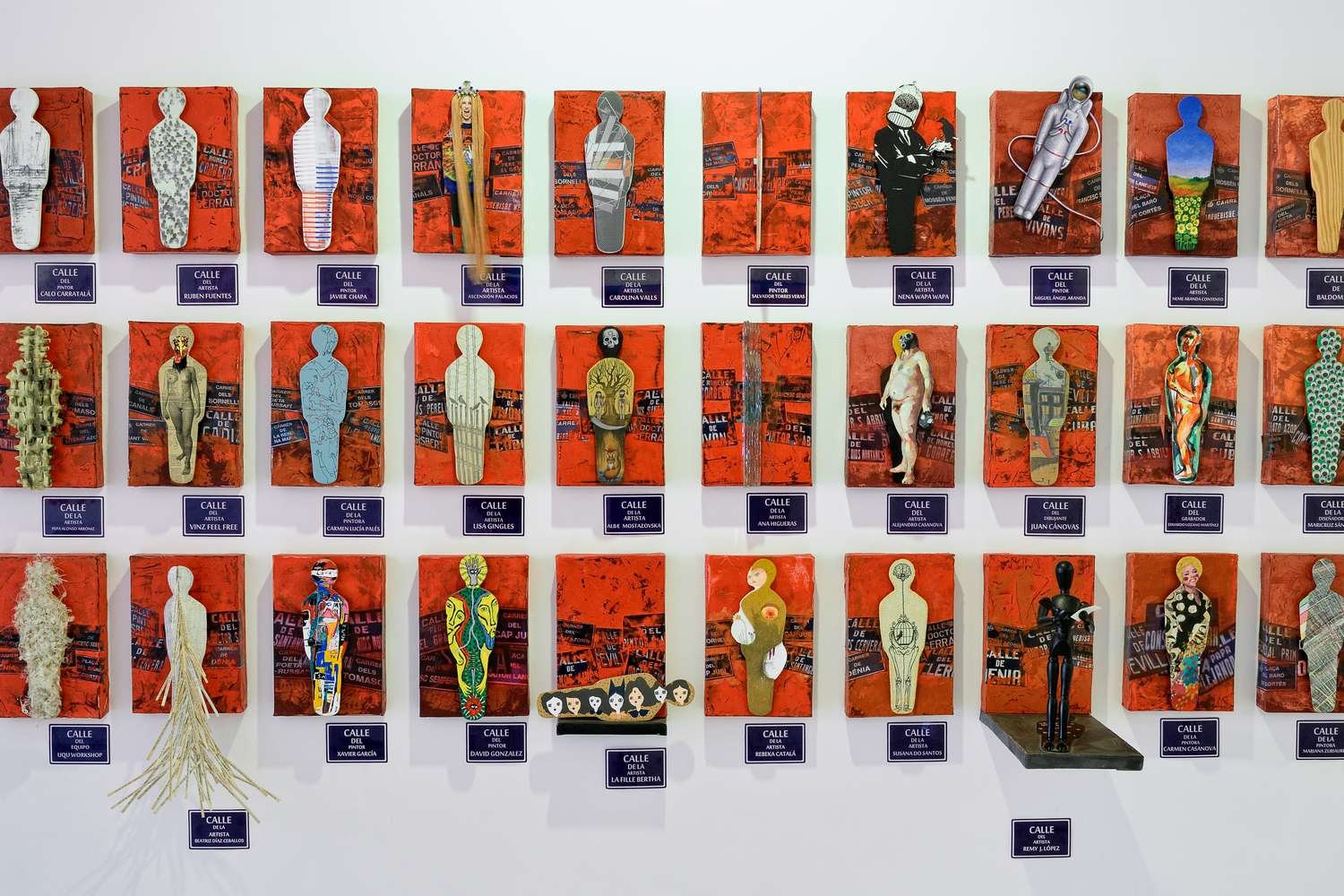 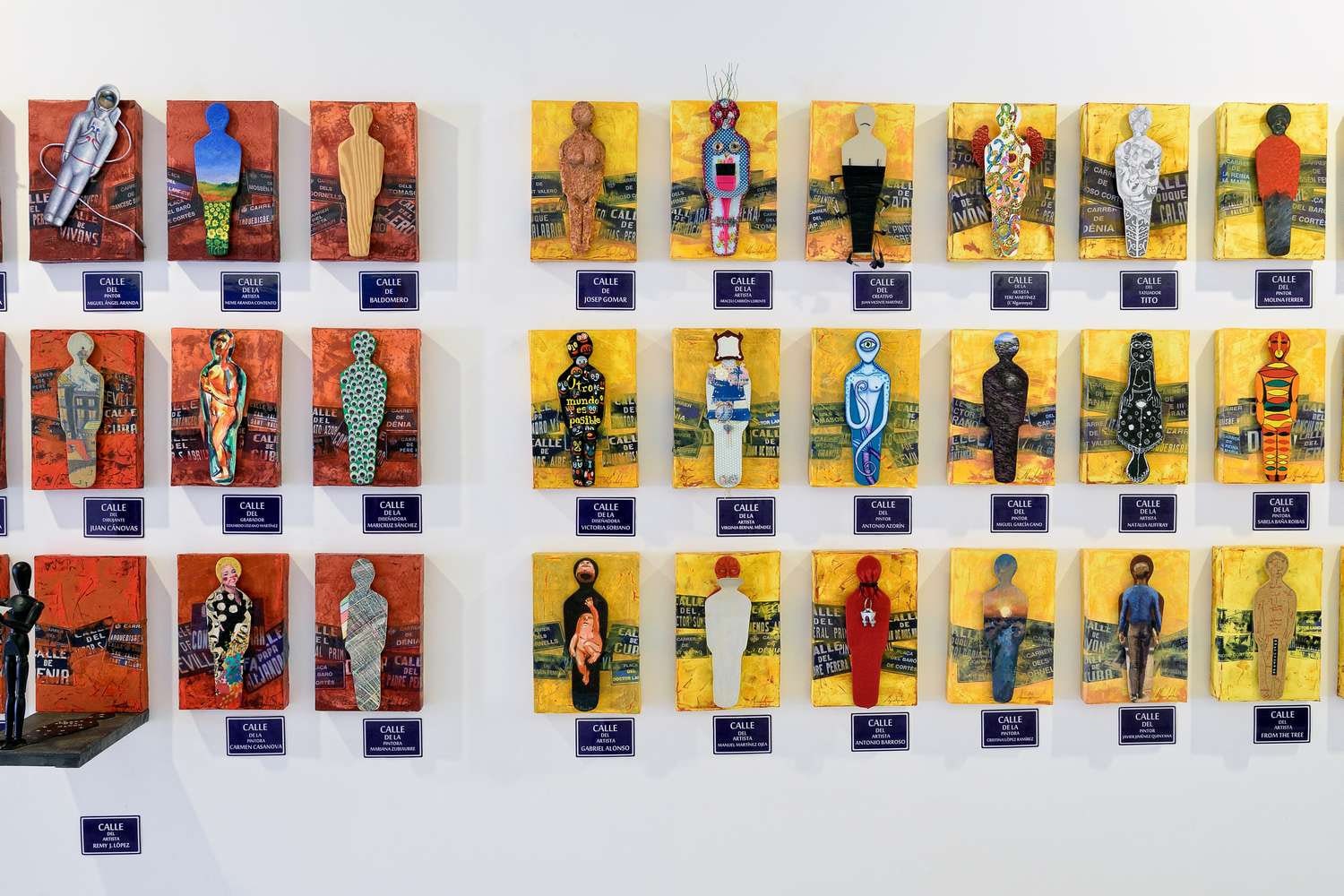 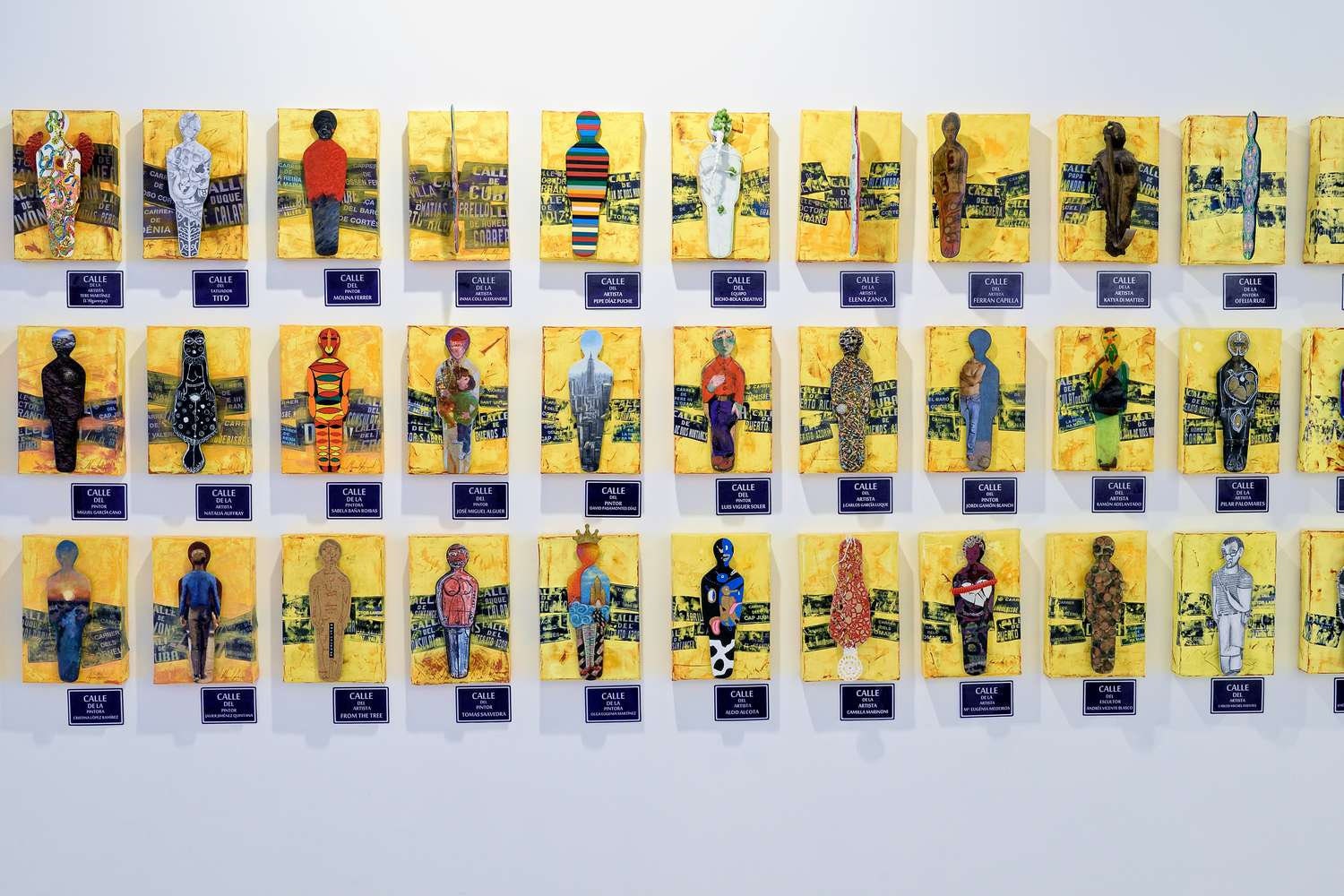 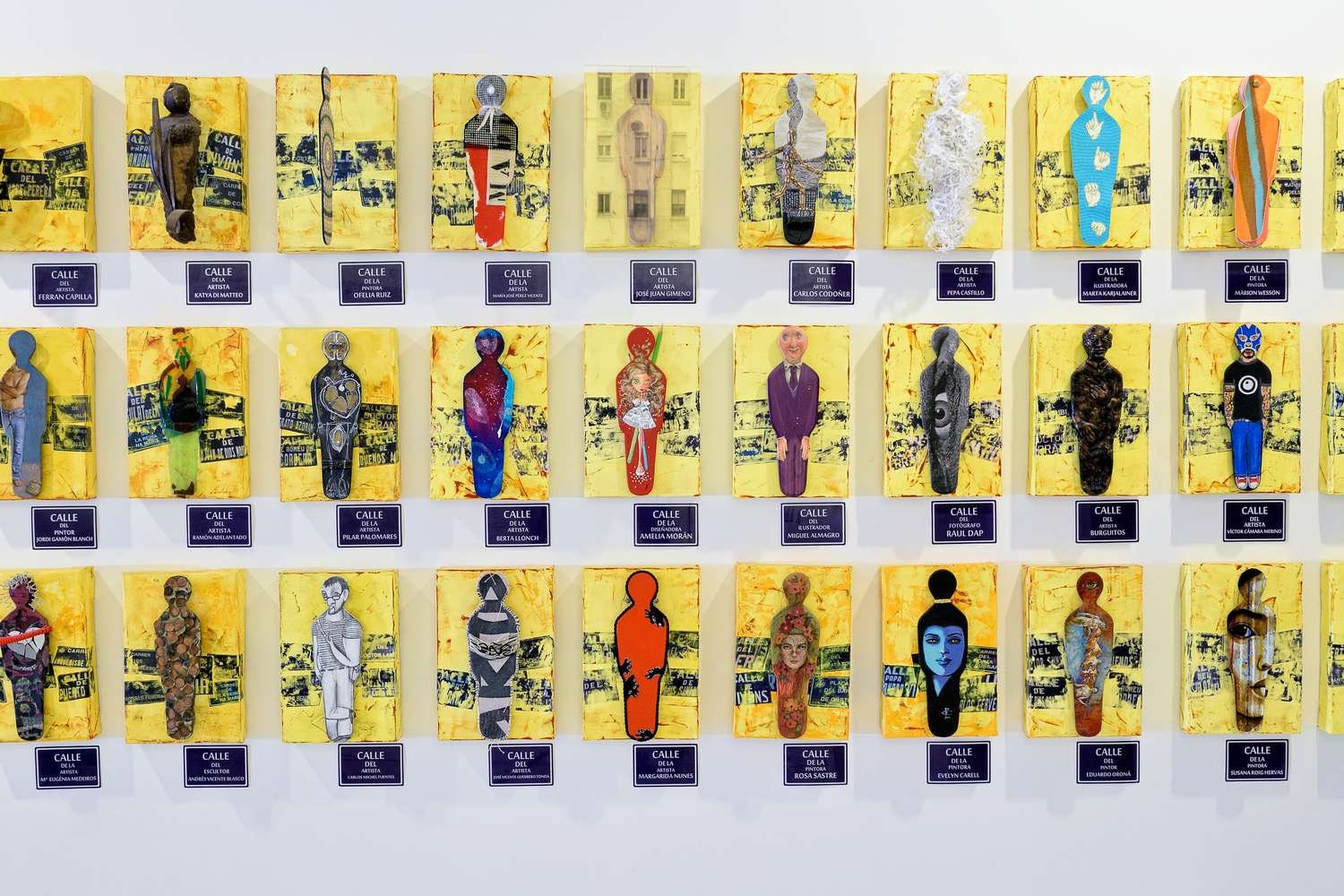 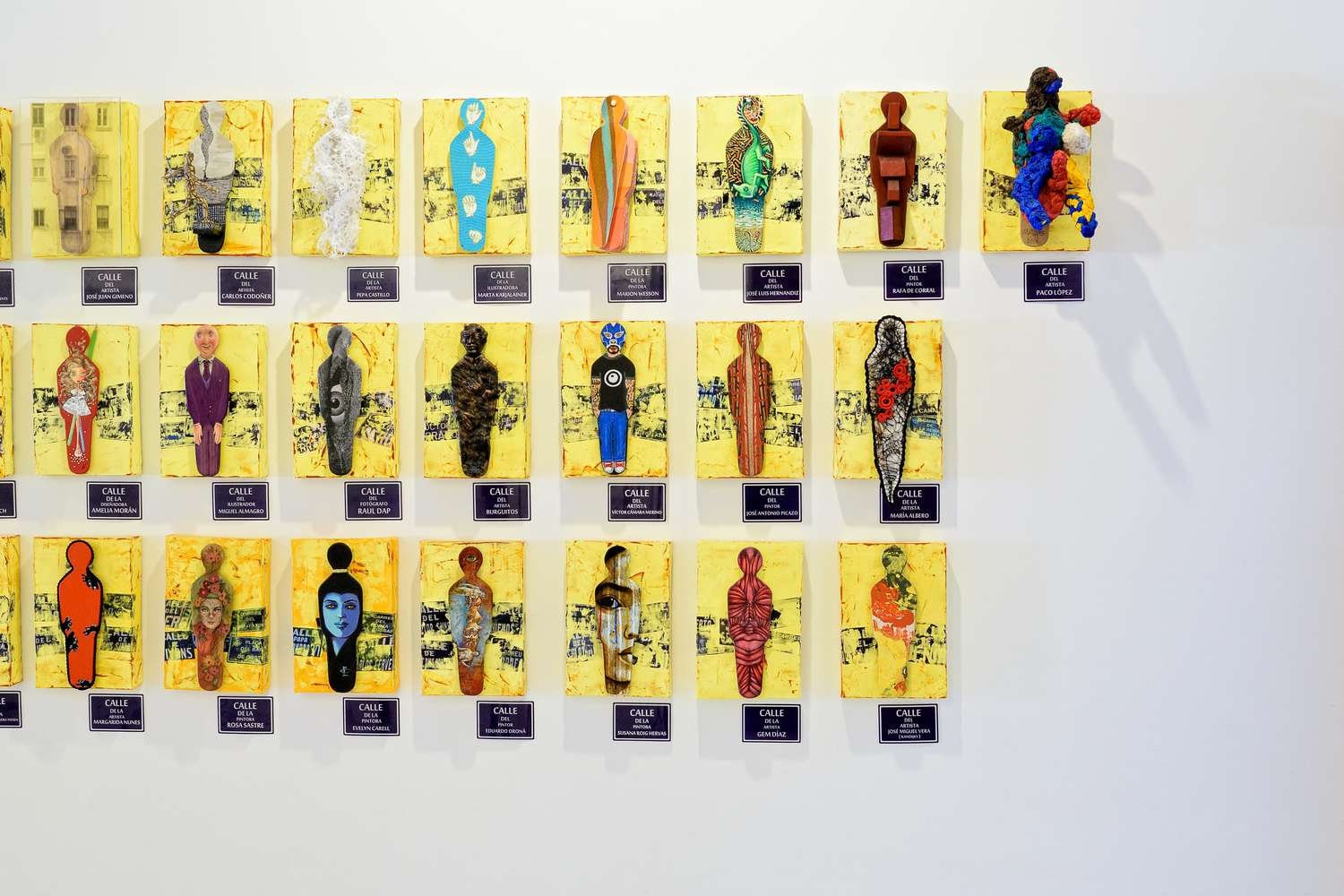 Collective Brushstrokes is a project of indivisible character and with that premise all the artists have participated. The project is only sold as a whole and never individually.

IMPORTANT
Before making the purchase, contact us to inform you of the characteristics and peculiarities of the project, and thus have full knowledge of all the details. The main work measures 150x150 centimeters and each annex has a measure of 19x24 centimeters. This makes a space of 15 linear meters necessary for an installation similar to the one you can see in the images. If possible, we recommend arranging a visit to see the project first-hand. Once the sale has been confirmed and due to the special characteristics of this work; NO RETURN WILL BE ACCEPTED.

You can see the entire project and annexes at: https://pinceladascolectivas.blogspot.com/

COLLECTIVE PINCELADAS.
Within the Valencian artistic panorama and more specifically during cultural activities developed in the Ruzafa neighborhood of Valencia, an artistic project was born that represents the history, meaning and sensitivity of a group that in these times of crisis and depression is giving an example of the good results of collective participation for the benefit of a neighborhood, the coexistence of its neighbors and the impulse of its businesses.
Thanks to the artistic collective concentrated in the neighborhood of Ruzafa, with a deep-rooted history and unbeatable geographical location in the map of the city of Valencia. The casual concentration of artists, workshops and exhibition spaces, has managed to revitalize a depressed area of our city.

This project arises with this idea. Represent the reality of a Valencian neighborhood that has opted for culture as a flag for its representation. A neighborhood in which they have learned to coexist different races and cultures with their customs. And that thanks to the loss of complexes has managed to rise with a name and a concept that goes beyond the merely visible. That concept is called ARTE, an artistic neighborhood.

PINCELADAS COLECTIVAS is a project proposed by the artist Miguel Ángel Aranda resident in Ruzafa, where he has his studio. Within the artistic activities he has carried out, he has several live projects developed in different shops in Ruzafa, which has given him recognition within the neighborhood. The project PINCELADAS COLECTIVAS began on May 14, 2011, developing for fifteen days in the Imprevisual Gallery.

To start the project and with the principle of participation, the collective of artists and creators who reside in the Ruzafa neighborhood or who develop activities in the neighborhood is summoned to carry out an intervention on a base in the shape of a human silhouette prepared by Miguel Ángel Aranda. The idea is simple, all participants receive a figure of the same format. Each artist has to intervene in it in representation of his person, his style or concerns, having total freedom in the subject or technique to be used. With these premises, the project is launched and the work PINCELADAS COLECTIVAS is born, which is completed within the established period with 20 pieces by different artists.

But the project takes on its own entity and in the following days begins to receive figures that for one reason or another could not be completed on time. To safeguard the artists who participated fulfilling the dates, but without underestimating the work done by the rest of the late participants, it was decided to incorporate these pieces as individual annexes, which accompany the main work as adjacent streets, extending each side of the work.
This part of the project is proposed with the challenge of obtaining 40 annexed works to complete it.

But once again, participation exceeds our expectations and crosses borders creating a project that, representing a multicultural neighborhood and artistic spirit, crosses borders and cultural barriers welcoming the participation of artists worldwide.
Today PINCELADAS COLECTIVAS has more than 150 annexes, plus the 20 initial figures to which will be added the figures of the artists who continue to join the project.

I believe that the work faithfully represents the concept of artistic collective and that thanks to the figures, it respects the individuality and peculiarity of each of the participants. Also highlighting the indiscriminate participation in which we can find ourselves from renowned artists to the most new and emerging creators The set of different nationalities within the project gives it a vision of the social, open and plural reality in which we live in our country and specifically in our city of Valencia that has crossed borders and barriers, welcoming and enriching the contribution of each of the individuals.
PINCELADAS COLECTIVAS makes visible the reality of our time and of the artistic collective that we have had to live.

Miguel Ángel Aranda tells us what was his inspiration to carry out this project:

We live in strange times, or at least it seems so to me. A world full of artifices, postures and labels that denature the human being. But there is a basic sense that we cannot avoid and must feel without ties or covers. For each one it is presented in different ways, for some it is love, for others it is that melody that can not be forgotten, a furtive look, money or a ray of Sun. But in the end, we all feel the same. It is the engine that moves us. I feel it when painting, when I start a new work, when I finish it and contemplate it, when I propose, when I create, when I recognize the emotion in the eyes of the observer. And as an artist I think that should be our highest aspiration. That's passion for me.

With this maxim was born the project Collective Brushstrokes, a vision of the common consciousness of the artistic collective that is represented in the initial work, and that without forgetting the individuality, creativity and style of each artist, presents each one with its peculiarities and personality.